The first of our workshops looking into the ideas behind the Shanks Pony sculpture was held at Killie Can Cycle.

There are many verbal metaphors that reference horses in describing travel by foot -‘on the hoof’, ‘trot off to’ etc. The purpose of the workshop was to look at visual metaphors

We started an investigation into the metaphorical ‘Shanks Pony’ by building another metaphorical horse – the Dandy Horse, or Velocipede, the forerunner to the bicycle. ‘Shank’s Pony’ was cited in an early, withering critique of a demonstration of the velocipede was made  in The Dubuque Daily Herald in May 1869:

“A public exhibition of the velocipede was given on the streets last evening by Mr. Clark, who managed the vehicle with considerable skill… They are a toy, and will never come into general use in competition with Shank’s mare.”

Taking an unusual old bike from Killie Can Cycle’s stock as a starting point we made a working model of a dandy horse referencing some of the equestrian influences in the original designs – often decorated as horses the original dandy-horses were hindered by taking their engineering cues from carriage design. The front wheel would be articulated as if it would be dragged from in front like a cart pulled by a horse, rather than steered from behind like a contemporary bicycle. With back-to-front steering geometry and handlebars that acted like reins velocipedes were clumsy and chaotic to ride. Never the less the horse symbolism associated with the velocipede persisted into the development of the bicycle with early bikes such as that built by Kirkpatrick MacMillan featuring carved wooden figureheads of horses.

As well as devising a working replica dandy horse we explored how readily visual metaphors between walking and horses could be created. A portrait of a horse was made using a boot to create the horses head, different styles of segs to detail eyes, nostrils and teeth and shoe trees as ears. This horse portrait became the figurehead for our velocipede. 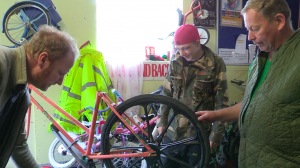 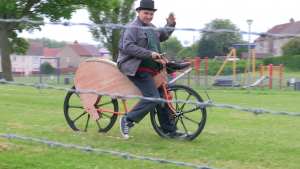 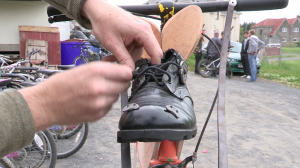 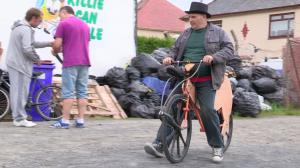