The Dandy Horse became a starting point for and exploration of what kind of horse Shanks’ Pony would be. The phrase is often used as if riding on Shanks Pony is your last choice, but not necessarily your worst choice. We played with the idea that even though more favoured modes of transport existed, Shanks’ Pony was always there for you when everything else had let you down.

Through several improvisations we looked at the demeanour of our every-ready but humble horse, we played with different gaits and movements of horses and played out situations in which Shank’s Pony might be called into service.

We set up a plinth and played with the idea of being the statue of Shanks Pony and how this humble horse would hold himself. He was ready, he was humble (too humble to stand on the plinth), he was sad and tired, he was even dead. We also played with the idea of meeting Shanks Pony on a journey at a point where all you other options were exhausted and you only choice was to walk. He’d cheer you up and gallop away with you, he’d drag you home, he’d be a companion and walk with you 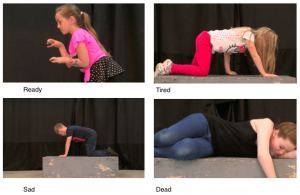