The work is a sculpture of the verbal term ‘Shanks Pony’. It takes the form of a horse but it needs also to somehow reference shoes.

The shoes produced in Kilmarnock were many and various, often of high quality but because of Saxone’s long history, and the fact there were many small shoes and leather businesses in the town before Saxone was established, theres not really an emblematic Kilmarnock shoe.

However, because the were characteristically well made,  Kilmarnock-made shoes are still regularly traded second-hand and most common amongst those sold are there a large variety of Clansman Brogues. These various designs of brogues made by Saxone have different patterns and detailing for each of the Scottish clans. The brogue is a stout outdoor shoe, the word Brogue being derived from the Gaelic for ‘shoe’ and referred originally to roughly made shoes in un-tanned leather. The term ‘brogue’ used to describe and accent refers to the people from the places that wore these shoes.

The characteristic decorative punched patterns on modern brogues is known as ‘Broguing’. These decorative patterns have a practical application – brogues are an outdoor, all-weather shoe and the punched holes and serrated edges of the leather help the shoes aerate and dry after use. Because of this functional aspect broguing is a decorative design pretty much unique to leather work and shoemaking. So shoemaking will be referred to in the sculpture by applying a brogued design. 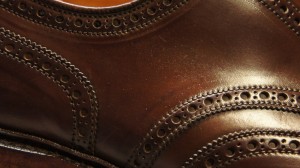 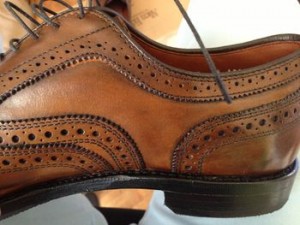 There are several variants of the phrase Shank’s Pony such as Shanks Mare and Shanks Nag, (never Shanks Charger, Shanks Stallion, Shanks Mustang), and the phrase brings to mind a low statues, work-a-day horse rather than a dynamic, heroic thoroughbred. One more historical variant of the phrase is ‘Shanks’ Galloway’. A Galloway is an now extinct breed of horse from the south west of Scotland and an ancestor to the current Highland Pony and Fell Pony breeds.

The province of Galloway formerly possessed a breed of horses peculiar to itself, which were in high estimation for the saddle, being, though of a small size, exceedingly hardy and active. They were larger than the ponies of Wales, and the north of Scotland, and rose from twelve to fourteen hands in height. The soils of Galloway, in their unimproved state, are evidently adapted for rearing such a breed of horses; and in the moors and mountainous part of the country, a few of the native breed are still to be found. … This ancient race is almost lost, since farmers found it necessary to breed horses of greater weight, and better adapted to the draught. But such as have a considerable portion of the old blood, are easily distinguished, by their smallness of head and neck, and cleanness of bone. They are generally of a light bay or brown colour, and their legs black. The name of Galloway is sometimes given to horses of an intermediate size between the poney and the full-sized horse, whatever may be the breed.

Sinclair, J., 1814: General Report of the Agricultural State, and Political Circumstances, of Scotland.

Much like the broguing suggests a tough reliable shoe, the Galloway suggests a tough and reliable animal. Perhaps one thats unlikely (compared to the horses more typically depicted in statuary) to be seen on a plinth and maybe even a bit embarrassed at being placed there. In terms of body language the sculpture would have a humble posture – head forward and low rather than the head high and back seen in equestrian statues.

The phrase ‘take Shanks’ Pony’ is most often used where a plan has changed and the decision has been made to walk instead – so our horse would be captured at the moment its weight shifts forward to take the first step on a journey.

Sculpturally ‘broguing’ would be used not just as pattern but in the same way that a brogue pattern is produced – the pattern of circles and zigzags is cut through the leather, so I’m experimenting with ways that a brogued pattern can cut through my sculpture – so that the pattern is revealed against the sky when seen at a distance and creates interesting sculptural forms when seen at close quarters. In these initial sketches the zigzag edge of the brogue pattern is used to help describe the shaggy thick hair of Galloway type ponies 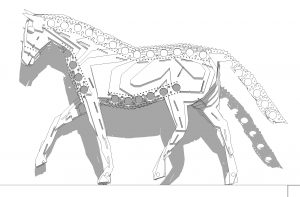 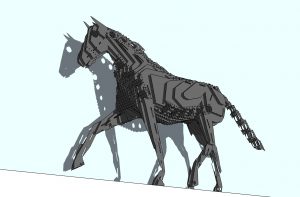 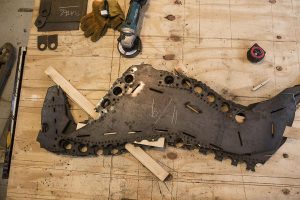 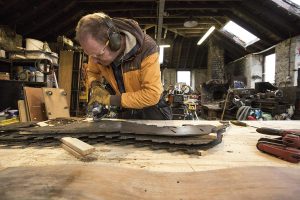 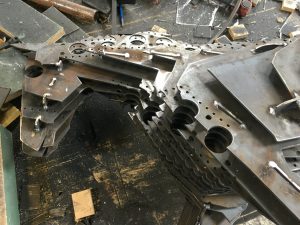 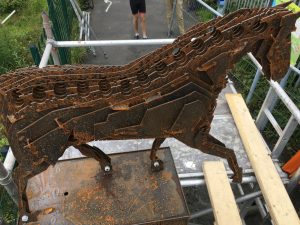 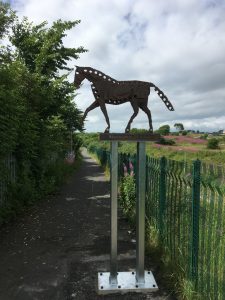 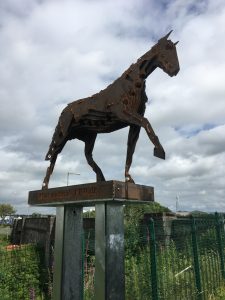